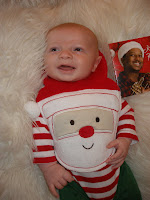 Here are some highlights from 2009:

Theresa Andersson performed on Late Night with Conan O’Brien and on the Late Late Show with Craig Ferguson. She toured all over the US, Canada, and Scandinavia making thousands of new fans. Her online videos have been seen by over 1,000,000 people, and she just released a brand new video for Birds Fly Away, off of her Hummingbird, Go! CD. And KCRW named her appearance on Morning Becomes Eclectic one of their top 10 performances of the year!

Kermit Ruffins put out 2 fantastic albums (Livin’ a Treme’ Life and Have A Crazy Cool Christmas!) and hit the Billboard Jazz Charts with both of them. He began work on HBO’s new series, Treme. In addition, Kermit completed a new video for his hit single from his Christmas CD, A Saints Christmas.

Jeremy Davenport released a highly acclaimed new CD, We’ll Dance ‘Til Dawn, and continues to make new fans every Thursday, Friday and Saturday in the Davenport Lounge at the Ritz-Carlton in New Orleans.

Irvin Mayfield’s new club, Irvin Mayfield’s Jazz Playhouse, opened and is thriving in the Royal Sonesta Hotel, bringing Jazz back to Bourbon Street. Although they released it on another label, the New Orleans Jazz Orchestra received a Grammy nomination for Book One. Irvin will finish up 2009 and kick off 2010 on NPR’s Toast of the Nation from the Dakota Jazz Club in Minneapolis, MN.

Jon Cleary performed all over the world with John Scofield and the Piety Street Band.

Henry Butler received his 9th Blues Award nomination and made a move from Denver to New York.

Mark Samuels, President of BSR was honored with his inclusion in the coffee table book, How They Did It by Sally Forman profiling New Orleans’ great entrepreneurs of the past, present, and future. He and his wife also had a new son while sending one off to college. Mark’s alma mater, University of Texas is 13-0, and the New Orleans Saints are 13-1 and on their way to the Superbowl. Whodat.