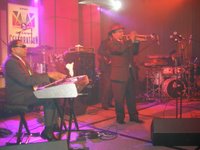 Just returned from the Grammy Awards official after-party where Kermit Ruffins and the Barbecue Swingers performed. Henry Butler sat in with Kermit for a bit of “Skokiaan”, and the most recorded drummer in history, Earl Palmer, was in the front row for Kermit’s show. Thank you to NARAS, the Grammy’s, and Musicares, for their support of New Orleans artists during these difficult times. To donate to Musicares, click on www.musicares.com.

3 thoughts on “GRAMMY Awards After Party”