On February 15, 2016 Jon Cleary was awarded his first Grammy award for his FHQ release, Go Go Juice! We’ve released two other outstanding albums by Jon that we also hope you’ll buy if you don’t already own them. 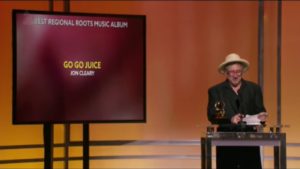 Check out this cover story in the New Orleans Advocate.

Pin Your Spin on iTunes

Jon Cleary and the Absolute Monster Gentlemen on iTunes