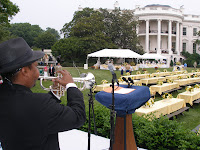 Basin Street Records’ recording artist, Kermit Ruffins, performed at the Congressional picnic at the White House in front of about 1500 people on Tuesday, June 19th. Kermit and his band were greeted by President Bush and the First Lady. Tony Snow’s band, Beats Workin’, also performed. Read all about the event and take a look at a picture of Kermit with President Bush HERE (there are a few pictures in this article). Also, view an AP photo of Kermit and the President HERE. And this just in…Bill O’Reilly included a clip of Kermit Ruffins with the President in his “Most Ridiculous Item of the Day” on June 21st. Watch it HERE.