American Idol star Kevin Gullage leads his band of Blues Groovers through a foray into all varieties of the Blues. “He’s the best young singer you’ll hear this year, hands down. Listen to him once and you’ll be plugged into the future of the blues.” – Rock and Blues Muse

“Kevin & The Blues Groovers put down a potent set of roots music on their new record Something Old, Something New, Something Borrowed Blues.”

“Gullage is a New Orleans native with a big-league voice, top-tier keyboard skills, and a hip, sophisticated style that he’s currently using to romance blues listeners all over the world. . . Although he’s only 23 years old, Gullage is already a seasoned performer and songwriter who sounds right at home in front of his all-pro band. . . He’s a legitimate musical phenomenon with a huge career in front of him who is capable of going head-to-head with the best in the business.”

“The Blues Groovers distinguish themselves immediately and have the power to put the hot sauce on every note they play. . . Add Gullage’s mighty talents into the mix and you get a traffic-stopping band fronted by the best singer in town.”

“He’s the best young singer you’ll hear this year, hands down. Listen to him once and you’ll be plugged into the future of the blues.”

“Gullage shouts the blues with the best of them.”

“Keep an eye out for Kevin & the Blues Groovers. The production on the album is fine and the musicians are tight, but it’s that voice that will stand the test of time.”

“This is 9-tracks of pure Blues listening pleasure”

“ “Movin’ On” is an excellent soulful emotional blues ballad, with a story of injustice that many will identify with.”

“One of the highlights of this debut is Gullage’s update of the Amy Winehouse hit “Valerie”. It’s great to hear a blues artist reach so far beyond the genre. It’s this kind of thinking that really keeps the blues alive and relevant for future fans.”

“It’s amazing how a young singer like Kevin Gullage makes himself heard with The Blues Groovers on ‘Something Old, Something New, Something Borrowed Blues’. This is what it takes for the future of the blues…”

Basin Street Records have teamed up with the talented, young phenom Kevin Gullage and his band of Blues Groovers to bring you Something Old, Something New, Something Borrowed Blues. You may recognize that inimitable smile on the front cover, as Kevin Gullage recently graced the stages of ABC’s American Idol, wowing the judges, advancing to Hollywood, and making it to the final 50 contestants. While he won’t be the next American Idol, Kevin is motoring forward with the release of his first full-length LP, several tour dates, and a residency with Disney Cruise Lines. While many were introduced to Kevin Gullage through the Idol stage, the young entertainer has a long resume, and quite the existing following in his hometown of New Orleans. A graduate of the Louis Armstrong Jazz Camp (whose alumni include Jon Batiste, Troy “Trombone Shorty” Andrews, and “Big Sam” Williams), New Orleans Center for Creative Arts, and Loyola University New Orleans—his musical education is outshined only by his practical experience growing up in the orbit of New Orleans legends such as Henry Butler and Davell Crawford, performing on stage with Blues Traveler, appearing in films with Chevy Chase & Wendell Pierce, holding a residency at B.B. King’s Blues Club New Orleans, and being welcomed as an official Hammond artist. Reflecting on his Idol experience Kevin says, “Idol wasn’t the stage meant for me. I could never argue that,” but assures his fans, “I love you all and I promise I will see you soon!” The release of Something Old, Something New, Something Borrowed Blues is an integral step in Kevin’s musical mission to bring his music to the world.

There’s a reason the biggest word on the album cover is BLUES; this is the blues album of the year. With a professional polish featuring not only the Blues Groovers, but a large cast of special guests, and ensemble players, this album is full of juicy horn stabs, searing guitar solos, and a whole lot of soul. The apt title gives the listener an idea of what to expect, as the album explores many avenues of blues music with classics such as “Sweet Home Chicago,” which appropriately features Chicago blues-man, Ronnie Baker Brooks on guitar paying homage to the Chicago-blues legacy, and “Ain’t Nobody’s Business if I Do” representing “something old.” Gullage flexes his songwriting chops presenting “something new” with several new original works including “Movin’ On,” “So Called Friends of Mine,” and “My Baby Gave Me The Blues (feat. Norman Sylvester)” With these compositions young piano-playing singer demonstrates he has the life experience to craft great blues songs. With their bluesified version of the as-made-famous-by Amy Winehouse hit “Valerie” Kevin & the Blues Groovers show they are comfortable borrowing songs from any genre to lay down some blues. The album is rounded out with a Little Milton blues anthem performed by many blues bands the world over, and a statement anyone can get behind, “The Blues is Alright.” 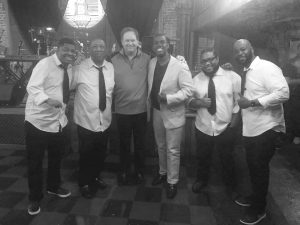 Tommy you encouraged Kevin and the Blues Groovers and you also predicted many great things for us. We only wish that you were here to see it all happening. I’m sure you are looking down smiling and doing the “Tommy Dance.” Rest In Peace as we strive to keep the legacy of true music flowing through the atmosphere. We are forever grateful.

Special thanks to Mark Samuels and Basin Street Records. What more could we hope for than to be a part of a great record label family. Thanks to Braden Piper; thanks for pulling this all together and making sense of it all. Thank you Eric Gales, Ronnie Baker Brooks, Norman Sylvester for putting your seals of approval on this CD by being a major part of it. Thanks to B.B. King’s Blues Club (New Orleans). Thank you John Dandry and Mike Harris; Once a Groover, Always a Groover! Thank you Keiko, Andy, Terrell, Andy J., Bruno, Charis and Ernest. The success of this record definitely is a result of everyone on it. Thanks to each and every one of you.

– Kevin and the Blues Groovers

Be the first to review “Kevin & The Blues Groovers – Something Old, Something New, Something Borrowed Blues” Cancel reply