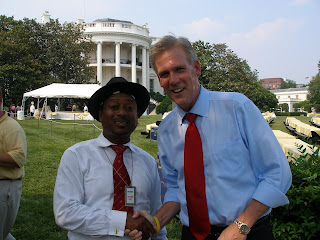 TONY SNOW, FORMER BUSH PRESS SECRETARY, HAS DIED AT 53: Tony Snow, a conservative writer and commentator who cheerfully sparred with reporters in the White House briefing room during a stint as President Bush’s press secretary, has died of colon cancer, Fox News reported Saturday. Survivors include his wife, Jill Ellen Walker, and three children. We had the pleasure of spending some time with him and watching him play in a band when Kermit Ruffins performed at the Congressional Picnic last year.