New Orleans Saints are Going to the Superbowl 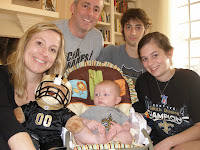 Kermit Ruffins was recording “A Saints Christmas” in August, and I read in early September that Peter King of Sports Illustrated picked the Saints to finish 3rd in the NFC South at 7-9. I wrote on my Facebook page “what will Sports Illustrated say when the Saints go 16-0 with an average score of 81-17”. Yes, I was exaggerating the margin of victory, but really knew that this was a special team before the regular season began.
Now that we (and yes, we, as in all New Orleanians wherever we may be) have made it to the Superbowl, I am reflecting on what a fantastic season this has been, and what a road the Saints and our city took to get here. I have watched the footage of Garrett Hartley making the field goal with Jim Henderson’s play call 6 times so far, and each time my eyes tear up and I get chills. Thank you to Tom Benson, Micky Loomis, Sean Payton and the Saints. But thanks go also to all of the previous Saints teams as those helped make this one special.
Football is just a game. But last night’s game, the NFC Championship, was just the most important one in the 300 year history of New Orleans.
Yesterday, I chose to stay home and watch and cheer with my wife and children including 3 month old Conor, who told me the Saints have been this great as far back as he can remember. I sat there in my rebuilt home reflecting on not just this season, but on the previous seasons, and mostly on the past four years. High fives and screaming with the kids on big plays, text messages and phone calls with my college freshman who is away, and holding hands when Hartley made his kick, made this one of the top shared experiences with my family.
I also enjoyed sharing the experience with hundreds or thousands of other people as I tweeted over and over all day and night yesterday, in what was a virtual cheerleading “Chant it when you tweet it: ‘This Is Our Year! #Whodat #Saints.'” and encouraged others to do the same.
Let me hear you: THIS IS OUR YEAR! WHODAT. SAINTS.
2010: A Saints Odyssey.
————————————————————-
p.s.
Check out a wonderful video essay by Wright Thompson that first appeared on ESPN NFL Sunday Countdown entitled “The Soul of New Orleans”. It includes a soundtrack of music performed by Kermit Ruffins.

6 thoughts on “New Orleans Saints are Going to the Superbowl”