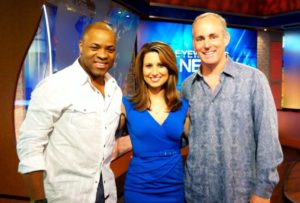 Last night, Mark Samuels, the president of Basin Street Records, was given the opportunity to discuss hydrogen sulfide removal with Melanie Hebert on The 504 on WUPL TV (WWL TV’s sister station). Along the way he also talked about Wynton Marsalis; Ben Franklin High School; the Cutting Edge Music Business Conference, creating the label with Kermit Ruffins’ manager, Tom; his brother Will stepping up when he needed help the most; driving from Austin to New Orleans 29 times in 9 months; and tonight’s benefit concert for the Louis Armstrong Jazz Camp.

Davell Crawford was also given an opportunity to talk to Melanie and perform. Catch Davell at the Prime Example 7/18, Preservation Hall 7/20, and Snug Harbor 7/23. Own his new CD?

Mark Samuels on The 504 with Melanie Hebert

Davell Crawford on The 504 with Melanie Hebert